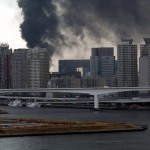 The Japan Meteorological Agency has revised the magnitude of Friday’s earthquake to 9.0, up from 8.9.

CNN quotes experts saying the earthquake appears to have moved the main island of Japan by 2.4m and shifted the Earth on its axis.

Reports from the National Institute of Geophysics and Volcanology in Italy estimated the quake shifted the planet on its axis by nearly 10cm.

Failure of cooling systems in reactor 1. At first radiation levels outside the plant were 8 times normal. They jumped to 90 times normal. Officials state that this is a dosage every hour equivalent to what one normally receives in a year. Not to worry, though, “a huge amount of radiation has not been released.”

Apparently even Tokyoites are being asked to remain indoors with windows closed and ventilation off for fears of a possible thermal plume coupled with a wind shift.

Three people had tested positive for elevated radiation levels yesterday. That number has now jumped to 160.

The shop shelves have been restocked after being empty before. The government insists that it is safe. My worry is that with 35 million people in the greater Tokyo area … there is really nothing else they could say. The chaos and destruction from any other statement would pretty much …

Well, the death toll has now risen to 2,000. NHK reports Japanese self-defense forces assigned to relief missions have been doubled in number to 100,000. The aircraft carrier Ronald Reagan has arrived off the coast of Miyagi Prefecture to assist.

Through it all, Japanese manners remain unshakable … “She was elderly and alone, injured and in pain. When the massive earthquake struck, a heavy bookshelf toppled onto Hiroko Yamashita, pinning her down and shattering her ankle.
When paramedics finally reached her, agonizing hours later, Yamashita did what she said any “normal” person would do … She apologized to them for the inconvenience …”