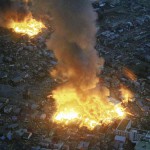 Holy Crap of the most immense proportions. A little less than an hour ago the room shook a little. I looked up thinking “hm, earthquake” and went back to what I was doing. A few moments later it was clear this was not our normal few seconds of shaking. The entire building swayed like a earthquake demo. It was impossible to walk without holding on to the walls. Everything fell of the tables. The lights burst in sparks. I made it down 6 flights of stairs and into the parking lot in my pajamas. Everyone shaking. It’s been an hour now and the aftershocks are still coming. The water on my desk is shaking as I write this. I am shaking too. Trying to walk feels like just getting off of an intense roller coaster. (Have not felt this since the 1989 San Francisco quake that knocked down the bay bridge and that was a richter of 6.9). Helicopters circle overhead as emergency vehicles do their loudspeaker thing that I can’t understand.

Massive quake hits Japan
Tokyo (CNN) — An 8.9-magnitude earthquake hit Japan early Friday, triggering tsunami warnings and sending people fleeing out of buildings in the capital.
The quake rattled buildings and toppled cars off bridges and into waters underneath. In Tokyo, crowds huddled together and tried to reach relatives via cell phone.
Its epicenter was 373 kilometers (231 miles) from Tokyo, the United States Geological Survey said.
It triggered a tsunami warning for various countries, including Japan and Russia, the National Weather Service said.
“Earthquakes of this size are known to generate tsunamis potentially dangerous to coasts outside the source region,” it said.

I have no idea why these CNN people need to say “early Friday” though … it was 2:45pm. And it’s now 4pm and my doors are still swaying side to side and frighteningly frequent intervals. And I do mean … at this exact moment. 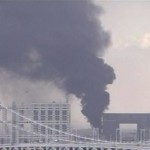